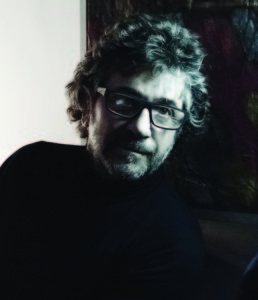 Maurizio Orrico was born in Cosenza in 1962.

In the early nineties his frequent travels to the United States lead him to take part in important collective exhibitions, not to mention his first solo exhibition in the Leo Castelli Gallery in New York, 1994.

After his debut in painting he focuses on analog and digital photography and the use of other means of expression such as sculpture, installation art and video art.

He is one of the founding members of PSL (Pluri Sensorial Laboratory), a laboratory which pursues techniques that relate to the reduction of perceptive anomalies. The laboratory begins with a systematic reconnaissance of the “sensorial concept”, this concept is limited to sense bearers.

The laboratory investigates and opens its research to a continuos work on “introduction techniques” defined as an extension of the sensorial spectrum. The representation and the creation of the tactile gallery is a simple reminder of contributions from artists such as Degas, Munch, Monet, Farrel, Myron and Sylvester Lega all of them somehow disabled.

Part of his work:

– The solo exhibition ZERO5 in Milan focused on the theme of animals.

Quoting Italo Zannier “(…) the image of animals like the image of war where blood doesn’t have smell or temperature, even its color is different, it’s pure pigment or pure light. Maurizio Orrico wants to shock the viewers, he summarizes the peculiar features of the animals, their questioning looks, especially cattle, sheep, pigs; he is somehow able to humanize these animals.

Orrico tries, lovingly, to discover new and hidden shapes of those animals with the use of digital technology and computers in a pictorial exaltation of colors, free from the objective tradition of photography intended as a facsimile.

– From 2007 to 2010 he travels to China where he has an exhibition in the Italian Pavillion at the Shanghai Expo along with Mimmo Paladino, he also shows a sculpture named “Equilibrio” in the “U.B.P.A.” pavilion, the sculpture portrays a man that extracts himself from a sphere which represents Mother Earth.

– He participates to the 11th Venice Biennale of  Architecture with the sculpture “I Viaggiatori”,

two 20ft tall men which represent one of the key concepts of his artistic research. Orrico’s traveler is quite unique, his oversized feet testify an experience that jumps over the obstacle of time, responding to strongly settled habits which created an anthropological mutation. The traveler’s huge feet lead us to the thought of the journey not being a coincidence but a need, a habit, the peculiarity of his being an individual in the world.

– He participates to the 54th Venice International Art Exhibition where he exposes a man that tries to put together fragments of his own shattered body. The man is hollow, he’s the absolute universal emptiness, the existential loneliness that we all face when we are alone, feelingless and without loved ones.

– In 2011 the Marzia Frozen Gallery in Berlin hosts his exhibition where a full display of his art, techniques and artistic journey, is shown through paintings, analog and digital photography, sculpture, installation art and video.

– In 2011 he carves the pulpit in Cosenza’s Cathedral, a UNESCO World Heritage Site, from a unique block of marble, using minimalistic lines which represent God, lined in a soft cloth which represents Jesus Christ on is right side.

His works can be found in public spaces and private areas in Italy and abroad.

He currently lives and works in his hometown Cosenza, Milano and Como.